The Prime Minister has spoken after the people of Scotland rejected the proposal of independence. David Cameron spoke of the ambition for change of the way people are governed in Scotland, England, Northern Ireland and Wales, the United Kingdom.

The Prime Minister has been a key supporter of the No campaign and has frequently spoken on the matter in the last few months;

"The people of Scotland have spoken and it is a clear result. They have kept our country of four nations together and like millions of other people I am delighted."

He said a break would have broken his heart and that it wouldn't only be the United Kingdom feeling the pain but the whole world shared the UK's sentiment.

He then moved on to pressing matters as Police in Glasgow dealt with the final, disappointed protests in Glasgow, "It is time for our United Kingdom to come together and move forward." 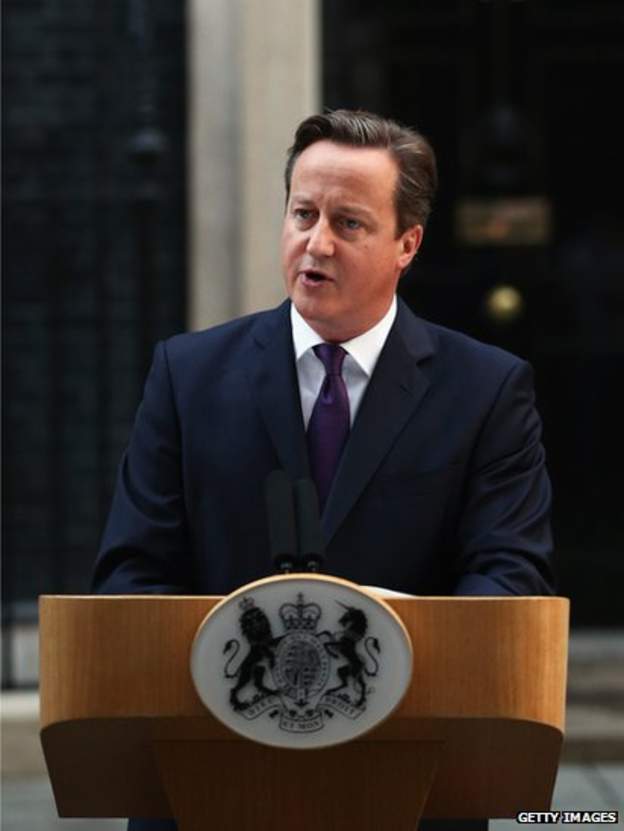 The Conservative leader praised both sides of the campaign, "I want to congratulate the No campaign for keeping us BetterTogether and I want to congratulate and for those who voted for independence, we hear you. For those on either side of the debate, we have an opportunity to come together."

"To those in Scotland concerned of constitutional change, w have delivered on devolution in this government and will do again in the next parliament."

The Prime Minister announced that Lord Smith of Kelvin would oversee the changes in Scotland after successfully handling the commonwealth games in Glasgow.

The statement continued in the form of reform, but for now it was the English, the Welsh and the Northern Irish who were listening clearly.

"Just as the people of Scotland will have more power over their affairs, the people of England, Northern Ireland and Wales will also have theirs.

Cameron added: "The rights of these people must be respected."

"In Wales there are proposals to give more to the government and I want Wales to be at the heart of the debate."

He then spoke of changes in Northern Ireland but the key part followed as he spoke of his ambition to listen to the English voices.

"I long believe that a crucial part missing from this national discussion is England. We have heard the voices from Scotland, and now the English must be heard. The question, now needs a decisive answer, so to England, as well as Northern Ireland and Wales must be able to vote on all these issues, at the same pace as Scotland."

He also reiterated the promise Alex Salmond had made on Wednesday, "This vote is once in a generation, maybe even once in a lifetime."

Ditching Sir Kier Starmer would be a big mistake3 months ago

Coronavirus and Brexit: The collapse of Boris Johnson4 months ago

Was a good Brexit deal always an impossible mission?4 months ago

Joe Biden is good news for Britain5 months ago

Freedom of movement comes to an end: A self-harming measure but a win for Brexiteers5 months ago

Boris Johnson has no idea where to turn5 months ago

Donald Trump vs Joe Biden: The Final Showdown6 months ago

Joe Biden may find solace in his basement8 months ago

Lack of humanity shows power of populism8 months ago

Labour voters need to compromise with new leader10 months ago